The Meaning of the Belt 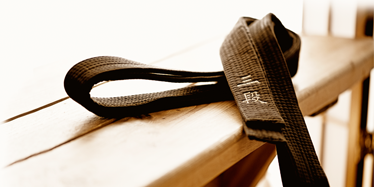 When you start training, it’s all about the belt. You might say you started for the confidence, and the self defence, but deep down, it’s those belts around your waist. There’s nothing wrong with that, it’s how I started, its how everyone starts. It’s about that colour, getting that next shiny colour, and putting all those shiny colours up on your wall.

Everything revolves around the belt. You can care less about your physically and mentally progression, you want that belt.

I work and teach classes at the Dojo, and constantly kids ask:

Usually this question is genuine: the kid doesn’t know the grading process. When students who’ve been training for years ask me at every single belt level when they’re going to grade, there’s a problem.

Here’s a scenario that happens a lot more than you think:

“Hi, how are you.” A parent asks. Let’s say her name’s Jen. Jen, leans over the front desk. It’s grey and long. Red, yellow and blue flyers sit on the counter.

“You know Keegan right?” This is usually accompanied by an action, as if she’s trying to slide in the next comment, casually. Jen, leans over and pumps hand sanitizer into her palms.

“Yes, he trains tonight doesn’t he?”

“He’s in right now. You’ve been teaching him the past classes, when do you think he’ll be ready for his next belt.”

I pause at this point. It depends on the parent. If this parent is new I take the question innocently; if the parent has been there for a while, and asks this same question every three days, I take a breath.

“I’ll make sure to take a look at him in class.”

That’s my response. Then, Jen rubs her hands with that sanitizer.

I then go to class and look at Keegan, or whoever it might be. I either give him his papers for his next belt or I have another talk with the mom.

“I looked at Keegan in class. He isn’t ready just yet, I gave him things to work on to be ready for next month’s grading.” This is usually the case. If he doesn’t have his papers, maybe he’s not ready? Weird how that works?

“Uh,” There’s hesitation, Jen glances to the floor and then to me. She rubs her hands, but there’s no sanitizer. “Are you sure he’s not ready yet? He does come twice a week, and he does practice a lot at home.”

This comment is hard to answer without sounding snappy.

“Once he works on the things I told him, he’ll be ready to go.”

Then I smile real wide.

It’s not the kid who cares about the next belt, but it’s the parent pushing them to ask, or asks themselves, as Jen (NOT A REAL PERSON) did. Sometimes the parent is competitive, and wants their child to be the best, not for the child, but for their own bragging rights. Then, there are the parents who are genuinely curious how their child is doing to class. This is the parent I don’t mind answering and giving feedback to.

The real test is black belt. If you’ve trained for most of your life and been through the spectrum of colors, you’d think by black belt students would have dropped the fixation of the belt? Would have focused on bettering themselves, compared to bettering their belt colour? There’s a surprising amount of people that reach black, and quit. What’s the point of continuing? You’ve finished.

This question shows they still have the mentality of a white belt. They look at the belts as coloured stepping stones, instead of personal progress. Black belt is not the end, black belt is the beginning. Just because the colour doesn’t evolve, doesn’t mean you can’t. Black belt means, master of the basics. And the ones who leave after back, haven’t mastered the basics of karate.

Once you reach black belt, you don’t want to grade, you never want to grade and you constantly feel you’re unready. But I still don’t know, but how about, but I’m sure there’s…

I’m a first degree black belt, and eligible to grade for my second degree…but I don’t want to. On my way to black, I was confident, I knew nothing could stop me from getting that belt. But now, I don’t want to grade. I had the opportunity to grade this winter (2013)—maybe I would have passed, maybe not—in Florida, but I turned down the offer and decided to grade in the summer (2014).

You find reasons why you can’t. You need to be convinced to get your next belt. Sounds weird? If you reach this point, you know you’ve accomplished something, you know you’re not focused on the belt, but the progress.

If you were to start karate, or continue, and never, ever progress a belt, never change colours and be stuck a white… Would you be able to do karate? Would you still do it?

How the Martial Arts helps you demonstrate and exercise EXCELLENCE
February 24, 2021