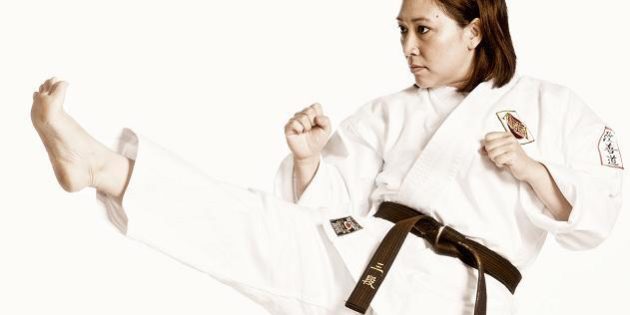 My name is Angela Gougeon. I’ve trained in the Martial Arts for 17 years and counting. These short blog posts are filled with the cool things I’ve done, or I’m planning to do and how Karate has helped me achieve them! I might have some exciting guest bloggers in for some weeks. Hopefully you can get on board the Karate train!

In a couple months, I’m getting married. If you’ve ever planned a wedding, been part of a wedding party, or watched a wedding movie, you know how crazy weddings are. When my husband proposed over a year and a half ago I was NOT prepared for the whirlwind that came soon after: the décor, the location, the guest list, the everything!

How I stayed sane: My Martial Arts training. Sure my parents are going to get me a wedding gift, but we both know signing me up for Karate (17 years ago) will always be their best gift.

As you train Martial Arts, you learn and accumulate lessons, and these lessons pile page after page into this encyclopedia you hold in your head. Through the planning of my wedding, I’ve resorted to this encyclopedia countless times: all of a sudden I wanted to be proactive rather than reactive, I want to book and plan as much as I can in advance: the hall, the church, the centerpieces, the guest lists, the flowers, the cake, the theme, the wedding bands and the dress, which I picked out in two hours of shopping. I don’t let it gnaw at me if the napkin color is a shade darker than I wanted, I check my encyclopedia, and if the encyclopedia tells me to look past it, I look on.

Martial Arts is a physical activity…but it’s also much more than that. Karate has let me keep my calm exterior when situations try and tug my inner Bridezilla from its cave. Karate has allowed me to take a step back from getting overly emotional with my soon to be in-laws (which I consider to be a HUGE accomplishment) and take what their overzealous actions as an interest instead of intrusion. What else can teach you that in life?

Say NO to Bridezilla. Say YES to Martial Arts!