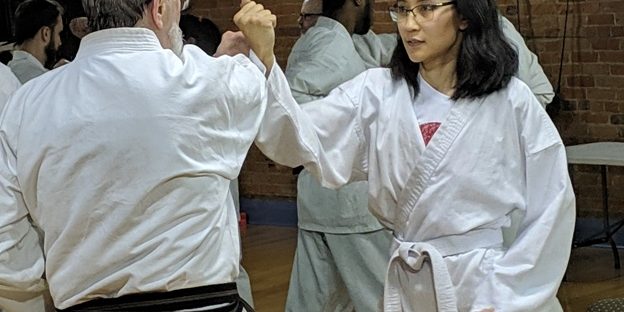 The Zen Buddhist Monk Bodhirma is commonly considered the originator of the martial arts including karate. In the sixth century, he traveled across the Himalayan mountains from India arriving in Honan, province of China, where he began a monastery.

Bodhidharma noted that although his disciples were strong mentally, they were weak physically, and were frequently suffering under the attacks of bandits. Bodhidharma developed a fighting system for his monks to help solve this problem. This system was created from Bodhidharma’s study of the hunting and fighting skills of animals such as the tiger, monkey, leopard, crane, and snake. Bodhidharma also employed various breathing techniques to better the health of the monks.

Merchants from Okinawa traded silks and spices with China. Some of these merchants learned the martial arts fighting system of Bodhidharma while in China and took this knowledge back to Okinawa. At the time, all metal weapons were outlawed in Okinawa and these fighting skills were badly needed by peasant farmers to defend themselves from ruthless samurai. The Okinawans with their martial arts knowledge took ordinary farm tools and with a few
modifications created new weapons and a new fighting system.

The Japanese were introduced to karate by the Okinawans in the early 1920s. From Japan, through Sensei Yamaguchi, Sensei Peter Urban brought Goju Ryu to The United States. Sensei Bob Dalgleish brought Goju Ryu into Canada in the 1960s.

How the Martial Arts helps you demonstrate and exercise EXCELLENCE
February 24, 2021

Have you ever thought about training with your child?
January 21, 2021
Blog Sign Up
Join our Blog List
AMADojo Newsletter.
From the AMA Blog
AMA Categories
AMA Archive
Go to Top