To the onlooker, Tai Chi may present as simplistic, like a slow-moving dance with little challenge and stereotypically associated with an older population. In reality, Tai Chi is complex, targets many aspects of human health and is beneficial to both young and old.

One primary benefit is Cardiovascular health. In Tai Chi practice, breathing is done through the nose. The tongue rests on the upper palate where it promotes saliva and prevents mouth breathing which can affect the balance of oxygen and carbon dioxide in the blood. As air is inhaled, it travels to the lungs where it is aided by surrounding muscles. Both the primary muscle used for breathing, the diaphragm, which is dome-shaped and separates the lung cavity from the abdominal cavity, and the intercostal muscles, which are between the ribs, contract to help enlarge the chest cavity. Since breathing is one of the fundamentals of Tai Chi, it is no surprise that these muscles along with the abdominal muscles, become stronger with its regular practice and good posture. While performing Tai Chi, breathing is natural, low, even and deep with the length of the breath extended, increasing air intake volume. This exercise in breathing works to increase lung capacity. Although Tai Chi is practiced slowly, it can have benefits as an aerobic exercise by speeding up the pace or making movements larger. And as with any form of aerobic exercise, the heart works harder which increases the flow of oxygen in the blood. 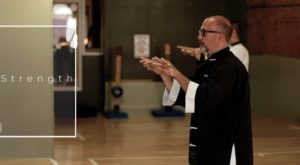 One will experience a warmth which seems to emanate from the inside out. When Tai Chi is performed regularly, it can be compared to a brisk walk or resistance training, since these activities do not generally cause shortness of breath. Therefore, Tai Chi is a safe form of exercise for those afflicted with breathing issues such as asthma, bronchitis or emphysema. On a personal note, one year after I embarked on my Tai Chi training, I was diagnosed with an autoimmune, inflammatory disease called Sarcoidosis. Sarcoid can affect any organ in the body, even multiple organs. For the majority of those living with sarcoid, it afflicts the lungs by attacking healthy tissue, forming small nodule-like growths called granulomas. This was my case. As one can imagine, breathing can be compromised. Many lose lung capacity, require oxygen and may even necessitate a lung transplant. I am very fortunate that for the past six years my lung function has remained normal and stable. Even though I have a very good medical team and I am on medication, I truly believe that my Tai Chi training is integral to my continued lung function stability.